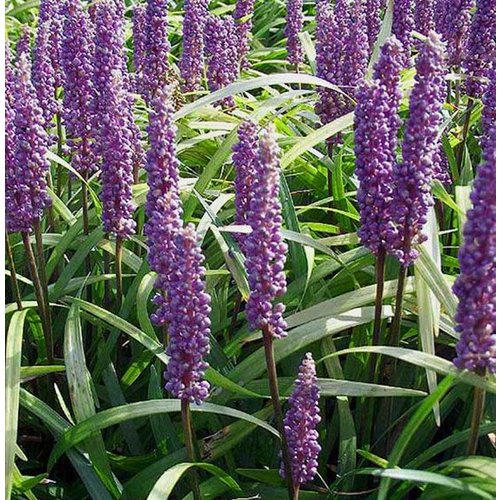 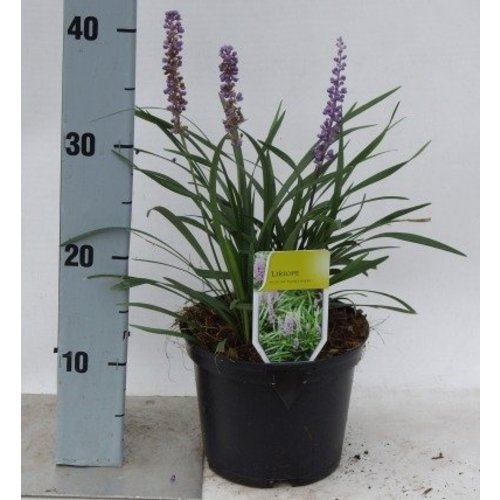 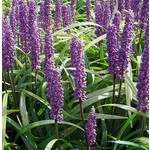 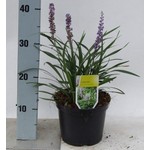 Liriope muscari Moneymaker or lily grass is a solid plant that is winter green. We share this lily species under ornamental grass because of its beautiful leaf.
This is around 25/30 cm high and the leaf is freshly green in color and has some of the Ophiopogon species.
Liriope becomes larger as a rule, but is like the Ophiopogon species, which can be used in plantations and solitary or edge planting.
Certainly in a rock garden, Japanese garden or border, this ornamental grass is a success. The Liriope and Ophiopogon species can also be used well as a cultivar plant.

The bloom of this Liriope is really above the plant and falls immediately. This lily grass species has a purple / purple inflorescence that looks somewhat like the Grape (Muscari). The bloom is also slightly higher than the Liriope muscari Big Blue, and the flower is also larger.

Later in the summer the flowers will emerge from August and the Liriope muscari Moneymaker will flourish until October.
Combined with the beautiful dark green leaf and the opaque bloom, this makes a special plant.

By autumn, the bloomed flowers will take place for blackberries, which often remain in the plant in winter.
If you use the plant as undergrowth or soil cover, you initially need 6-8 plants per m².
After a few years, it's a dense green blanket where weeds will absolutely never get a chance and you will have some more time to enjoy your garden.
Plants in the full soil in permeable soil are fine but no prune, lily grass grows in all places.
Half shadow to a shady place is no problem for growth and bloom.
Hence, it is easy to use as a plant under planting.

Lily grass needs very little maintenance, you may spread some crustaceans from April / May, and you do not have to do anything.
Liriope tolerates heat and drought as well as moist shady conditions. However, the plant prefers a place in half shadow in moisture-permeable soil, in such a place it will expand rapidly.
Winter hardness is very good and certainly not a problem in our climate.
Winter hardness zone 6a (-23ºC).

Yes! This is the product I want
Sorts: Bloemen-flowers
2 Review(s)
€3,55
We use a cookie on our website that is only necessary for processing your order. Hide this message More on cookies »