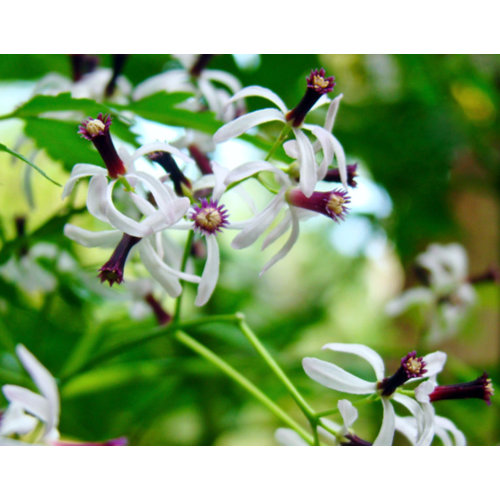 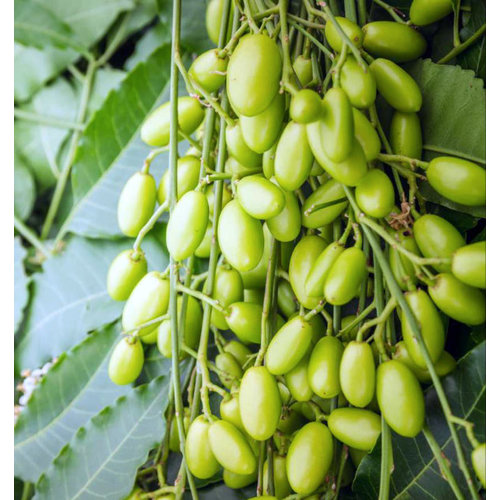 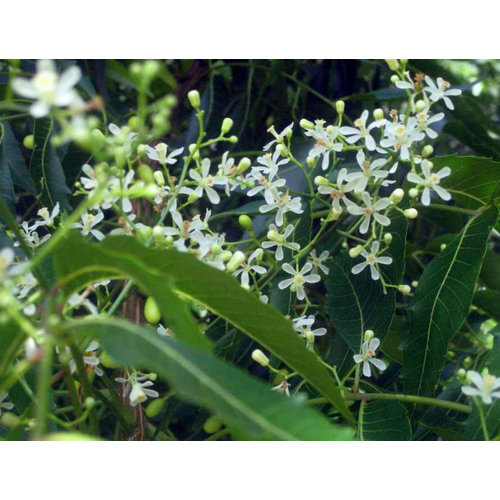 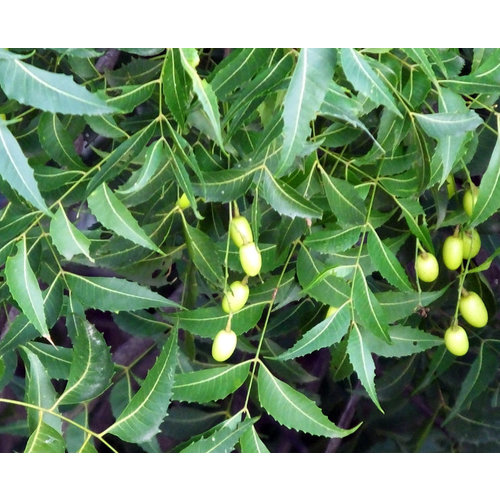 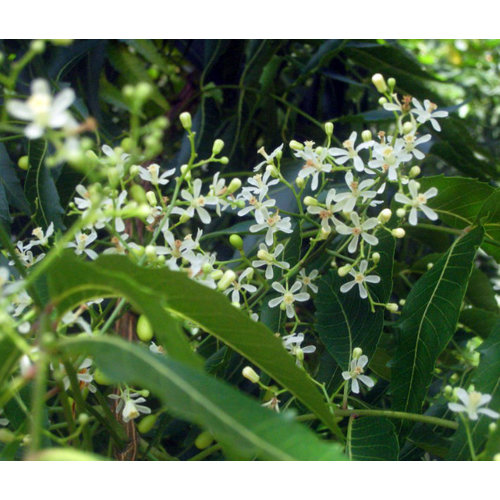 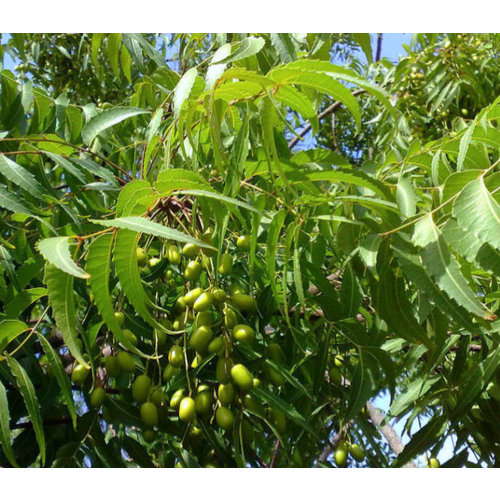 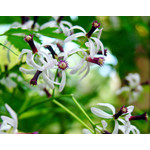 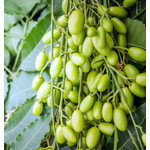 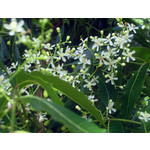 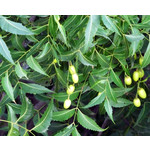 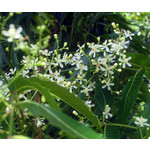 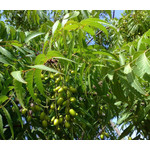 Azadirachta indica also called Neem tree or Neem bush is a real wonder tree. It is an evergreen tree or shrub that can grow up to 15 to 20 meters in nature.
The Neem tree is very drought tolerant and an easy tub plant, likes to stand in a sunny light place.
The plant can be pruned in a tub and kept at any desired size.
The plant is self-pollinating and receives flower panicles in the spring with more than 150 flowers per cluster. The flowers are up to 1 cm in size and smell very nice.
The Azadirachta indica blooms from its 3rd year and therefore gives fruit.
These fruits look like olives and are green and oval in shape.
The plant originates from tropical and sub-tropical regions.

The medical aspects of the Neem tree are special. Everything from the plant is used because of its medicinal and antibiotic properties. In addition to being a very effective medicinal herb, it is also used as a biological insecticide and repellent.

Leaf tea is traditionally used to treat malaria, stomach ulcers and intestinal worms. The leaf juice is applied externally to ulcers, wounds, boils and eczema. It is also fever-resistant and blood-purifying.

An oil extracted from the seed is a strong antifungal, anthelmintic, antiseptic and purifying. It is applied externally.

People use the twigs as toothbrushes, where they help strengthen gums and prevent gum disease. Dentists find them effective in preventing periodontitis.
The bark is bitter and astringent. A decoction is applied externally to hemorrhoids.

Neem oil is a powerful spermicide and can therefore be used as an inexpensive method of contraception. Neem oil is traditionally used as a topical treatment for skin symptoms in both humans and cattle, but it should not be taken orally.

The dried leaves are insect repellent, they are used as mothballs in linen cupboards and are also placed in books in libraries.
The Neem tree is a powerful insect repellent and an excellent means to keep mosquitoes away.
As an insecticide, the most important active substance is azadirachtin. Extracts can be made from leaves and other tissues, but the seeds contain the highest concentrations of the compound.
It acts as an insect repellent, inhibits nutrition and disrupts insect growth, metamorphosis and reproduction.
Neem-based formulations do not usually kill insects directly, but change their behavior in significant ways to reduce pest damage to crops and reduce their reproductive potential.

Azadirachtin influences insect physiology by simulating a natural hormone. It has been shown to affect egg production and hatching rates. Azadirachtin can inhibit moulting and prevent larvae from developing into pupae.
Many foliage-nourishing species avoid plants treated with neem connections or stop eating after ingestion of neem.
It has been shown to be effective as an antifeedant in around 100 insect species and various species of lice. The extracts therefore work particularly well to protect plants against defoliation without affecting the useful pollinating insects such as honey bees.

A traditional agricultural practice involves the production of "Neem tea". The seeds are dried, ground and soaked in water overnight to produce a liquid pesticide that can be applied directly to crops.
Ground seed seeds are also used as a dry pesticide application, especially to combat stem drilling on young plants. These home-made remedies are often very effective in repelling pests such as lice or acting on insects as a deterrent to food.
The strength of home-made preparations can vary due to the concentration of azadirachtin and other compounds in the seed, which in turn may depend on the genetic source of the seed.
It can also be influenced by the process of handling and drying the seeds, contaminants in the water and exposure to high temperatures or sunlight. The active compounds break down quickly, so an application of tea tea generally offers about 1 week of protection.

Liquid Neem leaf extract:
500 grams of leaves are ground and soaked in hot water for 15 minutes or in cold water for 12 hours. The mixture is then supplemented to 4 liters, sieved and 1 tablespoon of liquid soap added.

Liquid Neem seed extract:
500 grams of dry seeds are finely ground in a mill or pestle, after which 10 liters are added with stirring. This mixture is left overnight and sieved the following day. This mixture can be active for 3-4 days, if it is stored in a cool and dark place. When used, 1 tablespoon of liquid soap (as a sticker) is added to every 5 liters of mixture.

Take seed powder:
Neem powder can also be used on plants. The dry seeds must be crushed to remove the cores from the casing. The seed kernels must be further ground, dried and ground into powder. The powder is often used against stock insects. But the powder can also be effective in the field, by pouring a suspension with water or sprinkling as powder on the bottom. In the soil it will protect the seedlings against soil insects.

Neem leaf powder:
The leaves are picked and dried the shade (NOT in the sun!).
Then crush the leaves and grind into powder.
If this is used in the field, the application must be repeated after one week; because the effect of neem decreases under the influence of sunlight.
Winter hardiness zone 11 (+ 8ºC).

Yes! This is the product I want
Sorts: Eetbare tuin-edible garden
0 Review(s)
€9,50
We use a cookie on our website that is only necessary for processing your order. Hide this messageMore on cookies »